01What is Deposit Insurance?

The Structure of Deposit Insurance 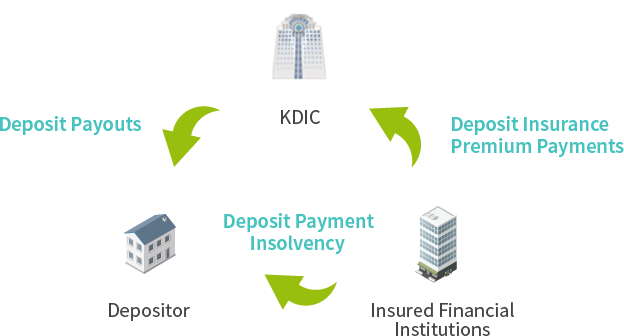 The Structure of Deposit Insurance

When a financial institution becomes unable to repay its depositors due to business suspension or bankruptcy, the whole financial systems as well as the depositors are affected. To prevent such an incident, Korea enacted the Depositor Protection Act (DPA) and put in place a depositor protection scheme.

As its name implies, deposit insurance works like any other type of insurance: A number of people with the same risk profile establish a fund during normal times in preparation for an emergency or disaster. Similarly, the Korea Deposit Insurance Corporation (KDIC), established under the DPA, collects insurance premiums from insured financial institutions during normal times, sets up a fund, and in case of a failure, makes deposit payouts on behalf of an insured financial institution.

Public Insurance Implemented according to Law

Deposit insurance is a public scheme that is implemented under law to protect depositors, so, when there are not enough funds to make deposit payouts, the KDIC may issue bonds and access alternative funding sources to acquire necessary financing.

The KDIC was established on June 1, 1996 after the legislation of the Depositor Protection Act (DPA) on December 29, 1995. The KDIC started as a protector of bank depositors, while there were separate funds for non-bank financial sectors. The coverage was initially KRW 20 million per depositor, but the financial instability that resulted from the 1997 Asian financial crisis led the government to adopting a temporary blanket coverage scheme.

The DPA was revised at the end of 1997, and, accordingly, separate deposit insurance funds were consolidated into the KDICí»s Deposit Insurance Fund in April 1998. Not only deposits of banks but also those held by securities companies, insurance companies, merchant banks, mutual savings banks, and credit unions (excluded from the coverage since 2004) became eligible for protection. This created a single, comprehensive, and integrated deposit insurance system designed to enhance financial stability and to ensure the publicí»s confidence in the financial system.

A transition was made to a limited coverage of KRW 50 million in 2001. The higher limit was established to ensure sustainable stability in the financial market.
As the system is not immune to the risk of moral hazard, the KDIC closely monitors both financial and non-financial risks of insured financial institutions.